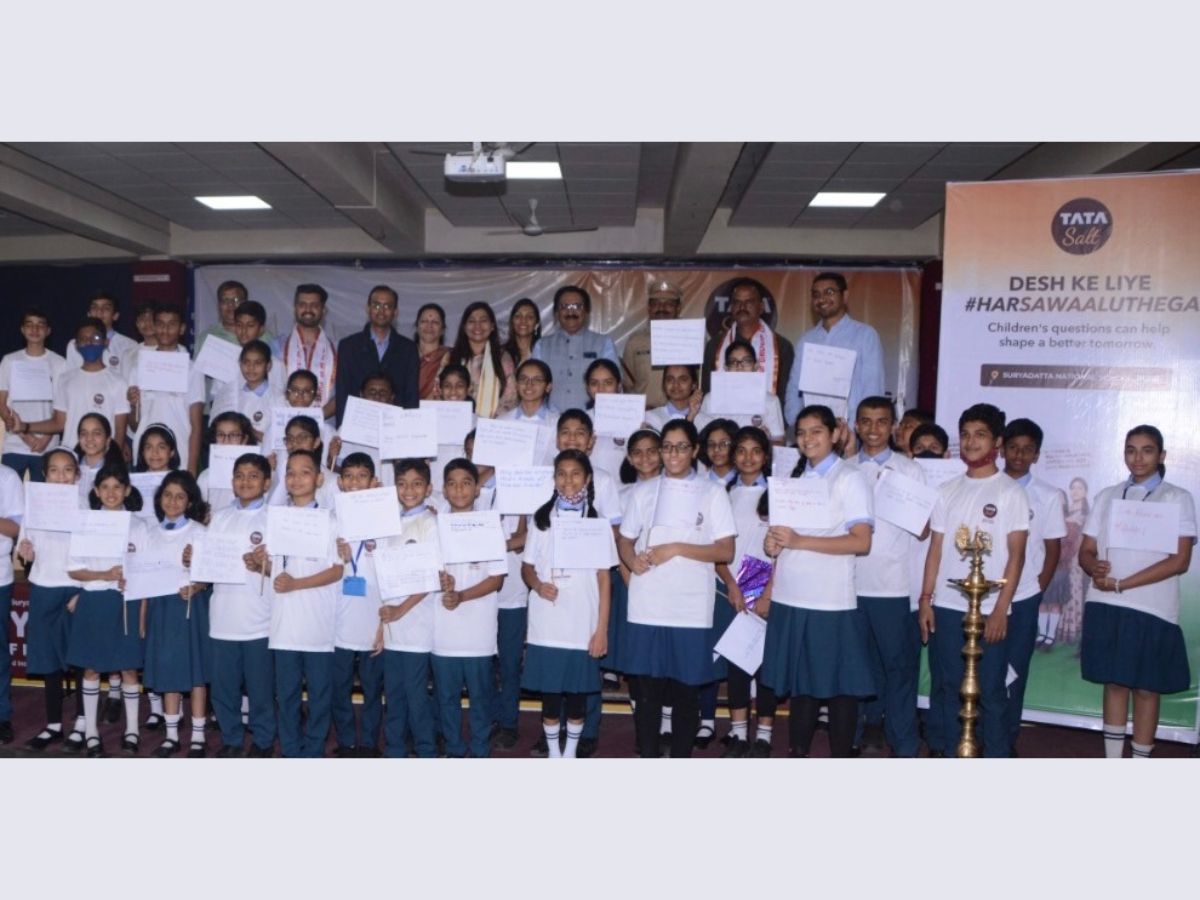 As part of its latest ‘Har Sawaal Uthega” initiative, Tata Salt is conducting a city-wide campaign in more than 300 schools to encourage children to ask questions as they have the power to shape their tomorrow

New Delhi (India), January 25: Keeping the theme of ‘Desh Ki Sehat, Desh Ka Namak’ at its core, Tata Salt, a pioneer and market leader in India’s branded iodized salt segment, has launched a nationwide Republic Day campaign called Desh Ke Liye #HarSawaalUthega. With its 360-degree approach, the campaign aims to empower children by providing them with a one-of-a-kind platform to raise questions that could spark relevant conversations and nudge a societal change.

As a run up to Republic Day, the campaign has gone on-ground and aims to engage with students across India covering states like Maharashtra, Punjab, Haryana, Gujarat, Chennai, Karnataka, U.P and Rajasthan among other states.

The on-ground event was successfully conducted in Pune city in Suryadatta National School along with attendance of more than 200students. Some pertinent questions were raised by the students including “How can more girls become IPS officers?”, “How can I keep my city Pune- Pollution free?” amongst others. Another pertinent question raised by children of Pune were “Why are periods a taboo?”. The discussion following this question raised an immediate impact with the school authorities confirming that conversations on topics will be encouraged more freely and responsibly in the school premise.

These questions were answered by our honorable dignitaries viz.Mrs. Shweta Shalini, Spokesperson of BJP Maharashtra and former Advisor to Deputy Chief Minister, Maharashtra, Mr. Santosh Gayke, DSP, Pune Police& Mr. Sanjay Chordiya, President – Suryadatta Educational Group. 300 exhilarating questions were raised by the students and 50 best questions were chosen shortlisted for the event. The jury also awarded 3 best students from the batch of 50 with books. All the students who participated in the event were praised by TATA Salt and were provided with participation certificates.

As part of the campaign, Tata Salt will organize city wide events across India covering private and government schools educing 30,000+ students and giving them a platform to raise their questions. TATA SALT will reward selected students based on their questions which will be shortlisted by a jury comprising of Policy Makers, Educationists, School Management, Police Officers, Celebrities and Bureaucrats.

Commenting on the launch of the campaign, Deepika Bhan, President, Packaged Foods- India, Tata Consumer Products, states, “Children can really reframe our thinking! They question what we are willing to accept as status quo and that challenge forces change. Desh ke liye #HarSawalUthega is a platform that endeavours to surface these real questions. We’ve received such insightful, provocative questions already and are enthused with the awareness and change the next generation is willing to imagine. Tata Salt is one of India’s most trusted brand, and we definitely want to partner this journey of fuelling an entire generation of kids to raise their questions and contribute to a better tomorrow.”

Mrs. Shweta Shalini, Spokesperson of BJP Maharashtra and former Advisor to Deputy Chief Minister, Maharashtra stated “I would like to thank The Social Lab (TSL) for inviting me to this event. We thank Tata Salt for organizing such an innovative campaign and TSL for its execution. The campaign not only provides a stage for the students to gain confidence and question the normal, but also pushes everyone to observe everything closely and seek answers to such questions”

Mr. Santosh Gayke, DSP mentioned “I would like to congratulate TATA Salt for organizing this event and TSL for inviting me to be a part of the panel. Interventions like these instill a sense of confidence in children and promote curiosity, more such events should be organized by responsible corporates like Tata Salt”.

Mr. Sahil Arora, CEO, TSL said “We are proud to partner with TATA Salt on this noble and innovative initiative, we look forward to invigorating questions from the students. The questions asked by students are thought-provoking and touch upon several social issues.”

C.A. Adesh Gupta, Director(Advisory Board), TSL stated “We are delighted by the response we have received for this program not only from the schools but our dignitaries who have had a fantastic time answering these questions. Such programs should be conducted more often to build confidence of children”

Goodyear to eliminate 500 positions as part of restructuring