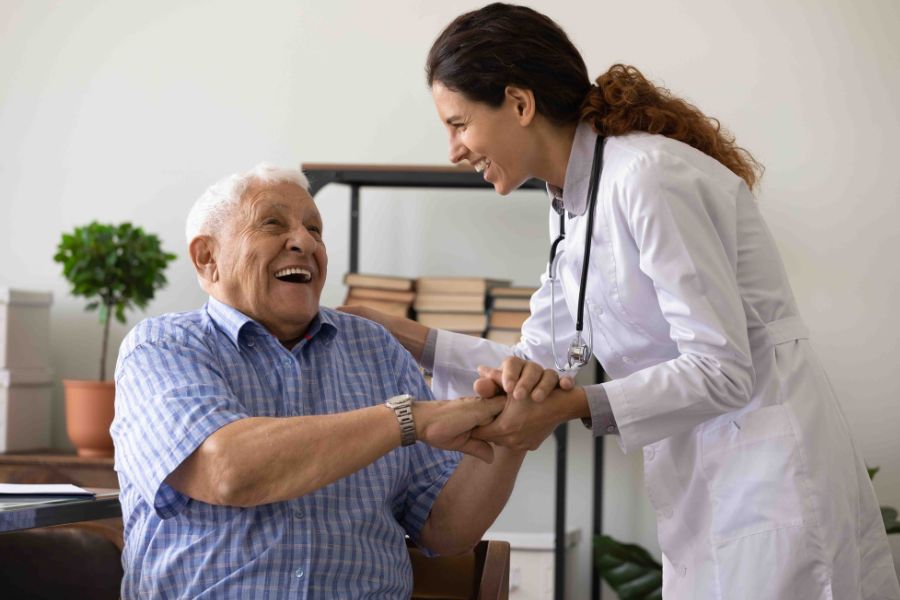 September 3: In March 2022, Subramanyam and his wife Sunanda, and their daughter Lakshmi travelled to Hyderabad from their home in Chennai, Tamil Nadu. The 73-year-old retired businessman and father of three were deeply distressed and in a wheelchair.

After several months of trying to heal a diabetic foot ulcer that had become gangrenous, Subramanyam underwent a toe amputation. But that operation did not stop the infection, and he was told that he would need to have his leg amputated below the knee or risk death.

Feeling hopeless, Subramanyam scheduled the surgery. However, one month before the scheduled procedure, Subramanyam and his family decided to seek a second opinion.

The doctor who performed Subramanyam’s angiogram told him about the advanced treatment for non-healing diabetic foot ulcers to prevent amputation at Park Endocrinology.

With Integrating Podiatrists, Wound Care Specialists, and Endocrinologists, Park Endocrinology treats non-healing wounds and saves patients from amputation by using its advanced technology as well as tackling the disease from all sides and corresponding medical super specialities.

With this, Subramanyam can avoid multiple doses of Insulin Injections or worry about any Hypoglycemic episodes he had before.

After the treatment, Subramanyam stayed in Hyderabad for a few weeks and then he was sent home to continue with his Advanced Diabetes Management Protocols along with clinical support via telemedicine.

“When we heard about the program, we were excited that there was a possibility of saving my dad’s leg,” said Lakshmi. She added, “Doctors said it was really bad, but they reassured my dad that they were going to try their best to save his leg so he could walk again.”

Although more prevalent in some groups of people, diabetes occurs across all populations. It’s the precursor for several serious health issues, including Blindness, Kidney Failure, Heart Attacks, Stroke, and Diabetic Foot Ulcers.

Amputation is usually the last stop of a process that begins with underlying Diabetes. Once an individual has had a lower extremity wound, they carry a 68% risk of re-ulceration in less than four years unless they make significant lifestyle adjustments, including intense diet modifications and guided physical activity.

“Many patients who were once told they needed a full amputation have been able to leave our treatment centre with a foot that works for their purpose, meaning they are able to get around and interact with their world,” Doctor said.

In June 2022, Subramanyam and his wife celebrated their 50th wedding anniversary. Their children threw a party, and Subramanyam was able to be present and walk around with a cane.

“It was truly a miracle, and I hope that anyone who is in the same situation that I was in will know about Park Endocrinology and the work they are doing because it is very effective,” Subramanyam said.

Are you or someone you know Facing Amputation Due to Non-Healing Diabetic Foot Ulcer?

A second opinion with Park Endocrinology can Lead to Second chances.