A Night of Sporting Triumph hosted to celebrate the 2nd edition of La Polo Indian Polo Awards In association with Rajasthan Tourism, along with Code Silver and Wedding Asia 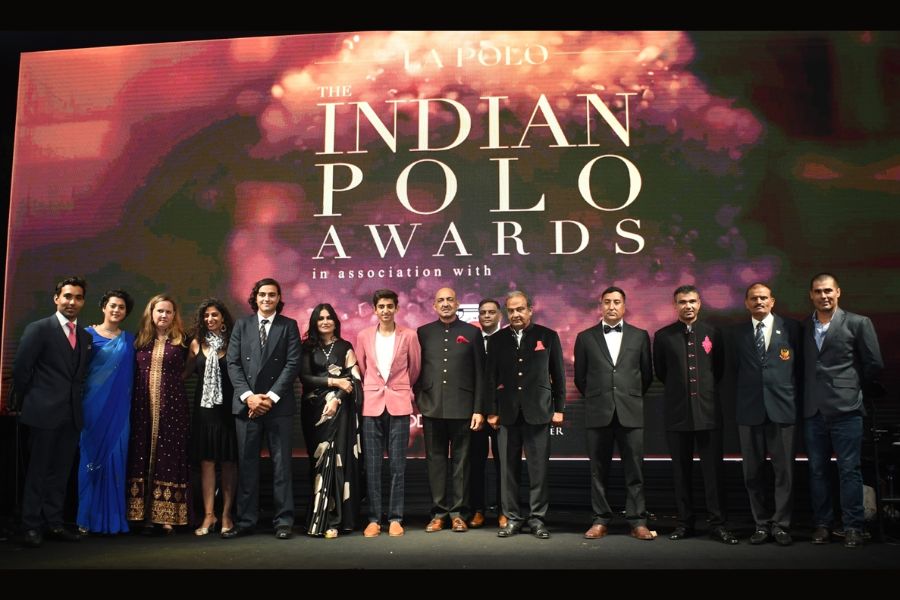 The country’s greatest names in polo – from players to trainers, groomers to teams, are honoured for their prowess in the sport of kings

New Delhi, November 08: It was a night of sporting triumph, royal patronage, and honouring the trainers, groomers, horses at the second edition of LA POLO THE INDIAN POLO AWARDS (TIPA), in association with Rajasthan Tourism, along with Code Silver and Wedding Asia, which was held on November 6 at the Taj Palace Hotel, New Delhi. The biggest names in polo, along with diplomats, and royals like H.H. Maharaja Gaj Singh of Jodhpur-Marwar, and H.H. Rajmata  Shubhangini Raje Gaekwad of Baroda, gathered for a glittering event hosted by Bollywood actor Pavleen Gujral and polo commentator Sharad Saxena.

The award ceremony began with H. H. Maharaja Gaj Singh of Jodhpur-Marwar presenting THE LADY PLAYER award to Ms Monica Saxena. Born in India (and quickly adopted by Indian royals and the British Army, and spread across the world), polo still continues as it did centuries ago, in Manipur, Leh, and Dras. THE BARODA THE TRADITIONAL POLO PLAYER award felicitates the custodians of our heritage, the traditional polo players, and was presented by H. H. Rajmata Shubhangini Raje Gaekwad of Baroda and Princess Alaukika Raje Gaekwad of Baroda to Mr Abdul Manaan from Ladakh.

A healthy, high-performance horse is imperative for a rider on the field, and the following awards honoured those who worked tirelessly behind the scenes. ALWAR THE POLO TRAINER award was presented to Ld Nadeem Ali (Army) and Risaldar Bhawani Singh (Civil) by Lt Gen Balbir Singh Sandhu( Retd), Vice-President of the Indian Polo Association.

This trophy is for those who work behind the scenes to tame rowdy ponies, and exercise them, rain or shine. THE POLO GROOM award was presented to Mr Hanuman Vinayaka by Ms Parul Rai, co-patron, Achievers Polo Team and Ms Shikha Durlabhji, Director, Code Silver.

And the hero on the field, the GWALIOR BEST POLO PONY award was presented to the majestic mare Rapper (owned by Ms Parul Rai and Mr Vikram Rathore, and trained by Chris Mackenzie), symbolic of the unbreakable bond between horse and rider, by Mr Maninder S Sethi, editor-in-chief of LA POLO.

Polo players from overseas are integral to the growth of polo in India. International polo players bring their own style of horsemanship and play, adding flair to their teams. Mr Daniel Otamendi from Argentina won the award for PATIALA THE INTERNATIONAL POLO PLAYER, presented by Princess Mriganka Singh of Jammu & Kashmir.

As a sport, polo requires commitment and investment, and is part of a large eco-system that needs nurturing. The Sahara Warriors also won the JAIPUR THE POLO PATRON award that recognizes sportsmanship and leadership qualities on the field and off it, and salutes the mastery of the polo player.

To celebrate his contribution to the success and glory of polo as one of its most steadfast pillars, Mr Naveen Jindal was recognized with the title of CONTRIBUTION TO POLO AWARD, by H.E. Ambassador of Argentina Mr Hugo Gobbi and H.E. Ambassador of Sweden Mr Jan Thesleff.

“The second edition of LA POLO The Indian Polo Awards strengthens the edifice of La Polo in Indian polo fraternity with a stronger groundwork pertaining to graveness of recognition towards all those who contribute handsomely to the world of polo and give it the foundation to base the regality and grandeur of this sport on.”

“The second edition of LA POLO The Indian Polo Awards sheds a light on the paramount of acknowledgement of all the stars in the world of polo, from groomsmen to players and ponies to teams; the Awards provide with a platform to celebrate the champions and victors of the polo universe without whom the magnificence of the sport wouldn’t have seen the light of the day.”

“We are delighted to be the partner for the second edition of the Indian POLO Awards, which demonstrates the importance of hard work and horsemanship to bring professionalism to polo. The state is replete with stories of polo, and symbolic of this sport’s legacy, resonating with TIPA’s sentiment, making it an exquisite fusion.”

“The awards honour the novelty and legacy of traditional polo in India, which has been cherished for centuries. This year’s TIPA pays tribute to the trailblazers of the sport who are constantly pushing the envelope. In keeping with this sentiment, our brand embodies the essence of luxury, reflected in the accents in the TIPA trophy. All aspects of polo went into its creation – it’s the story of polo in 3D, bringing the game of polo to life, from the ball and the mallet, to the horse, in black and gold. As someone born in the Pink City, one has seen endless matches at the Rambagh Polo Club.”

“Last year was a great success in Jaipur; and what a nice thing to do this year – bring together and pay tribute to all the people connected with polo, the sport of kings, and also for remembering us and inviting us. It’s not an easy game to carry forward, as we have issues in India, when it comes to grounds and sponsorship. The aim is to find ways and means to give young people who cannot afford it, a leg up, to get on in the game. Events like this help us promote the game, and I wish you very well.”

“The awards genuinely honour the Indian spirit of Polo and bring with them a luxurious perspective that encompasses the fashion industry, highlighting the unmatched energy and incredible talent of the those who are part of this sport. The brand resonated with the idea of TIPA awards for enlightening and encouraging the endeavours of polo”.